“Hi daughter/son, what’d you learn about in school today? What are you reading?”

You have to admit. It’s got a nice ring to it, but the reality of teaching a high school class with Bitch Planet would be challenging at best. Even in the most liberal district in the country you’d be likely told to cease and desist or get fired. It’s a pretty good way to go out though.

Kelly Sue DeConnick and Valentine De Landro’s Bitch Planet hits all the flashing red buttons for schools. It’s a comic book. It’s got swears. It’s got nudity. It’s got violence. It’s feminist. One of those you could probably get away with, but all five? Goodnight teaching career! The title alone would get you stopped in most districts.

Here’s the thing though. It shouldn’t be that unbelievable as a high school text. If you take this book and the back-matter essays, match them with some additional academic writing, a film, and a novel you’ve got a really strong basis for a study on the impact of institutional patriarchy women in the United States. A study that a high school student can access. And that is something we desperately need.

We don’t teach about women in high school. Women aren’t in the books. Women don’t take center stage. By not teaching explicitly about women, we teach many lessons implicitly about non-participation and low levels of importance. A colleague recently drew my attention to an article that Martin Luther King Junior’s mother, Alberta King, was assassinated while playing the organ in church. I had no idea that was the case. I didn’t even know her name. I’m a history major. I’m a history teacher. I didn’t know her name, let alone the fact that she was assassinated. The only thing I know about Betty Shabazz is that she was Malcolm X’s wife. I couldn’t tell you about her life’s work. I lived in Washington for over twenty years and I can’t tell you anything about senator Patty Murray’s work (in office since 1993). I know more about Massachusetts governor Charlie Baker and I’ve lived here for six months. This ignorance from the west coast raised, Oberlin-educated, child of political activists. There’s something wrong here and Kelly Sue DeConnick is trying to fix it. 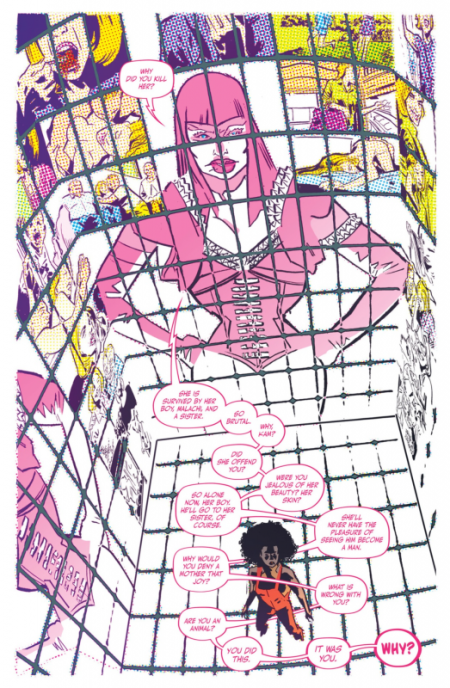 With Bitch Planet, DeConnick is doing dangerous work. She’s claiming the women’s prison exploitation film genre and using it to stick a shiv right in the patriarchy’s gut.

It’s important that Educators speak the language of their students. Paulo Freire states that “the only effective instrument is a humanizing pedagogy…. In a humanizing pedagogy the method ceases to be an instrument by which the teachers can manipulate the students, because it epresses the consciousness of the students themselves.” (Pedagogy of the Oppressed 30th Anniversary Edition, 2000, p. 69) Students are going out to see 50 Shades of Grey. They’re watching Game of Thrones. I had a 6th grader come to school quoting Inglorious Basterds. A casual flip through television and they’ll see more than their fair share of oppressed, abused, and marginalized women. We need to work alongside our students within their context while exposing them to new ideas and broadening that context.

The Hunger Games does a respectable job of putting a young woman in the lead role, but Bitch Planet tells the current dystopian story that The Hunger Games won’t touch. We rarely see the impact of Katniss being a woman. Katniss could be a man and the story would not fundamentally change. Bitch Planet puts gender front and center. Teachers have an obligation to expose their students to new ideas, issues, and values. In the realm of women’s stories we’re underperforming and Bitch Planet can provide some balance.

In terms of media literacy this is the comic book at its underground best: dangerous and subversive. You open the book and think to yourself “only in comics.” While reading it the voice in your head is constantly warning you. It can’t stay this good. No way she’s gonna go THERE. But it stays that good and DeConnick definitely goes THERE. The best part of it all is Bitch Planet isn’t even all that underground. It’s published by Image. You can get it at any comic shop. You can download it from Comixology and Amazon. The only reason you’ll have to hunt for it is if it’s sold out.

It’s also a really good book. The plot is strong, the characters are meaningful, and the art is fantastic. We’re 3 issues in at this point and the DeConnick’s shiv is honed just as sharp as in the first issue. The plot is ramping up quickly and the characters are deepening. There’s still time to pick up the back issues and get on board before this ship really takes off.

Once you read it you’ll probably decide that it’s not something schools should put in front of kids. (Particularly not the first issue.) But maybe reading Bitch Planet will help you see that we need more stories about women in schools, more stories that explore the woman’s experience. Perhaps you’ll start looking at how women are represented in your curriculum and the messages we send. Perhaps you’ll look for alternatives. That’s definitely worth a few bucks and a trip to the comic shop.

This piece is dedicated to my student Jia Wen (no hyphens). Thank you for pushing me for more women’s stories. You made our class better and you made me a better teacher. Keep the fire burning.