When Beverly Daniel Tatum recommends a book on institutional racism while speaking at Harvard, you take note. When she puts it in her top 3 recently published books you just go buy it. (Or order it during her talk perhaps….) When it comes to understanding systems of racial oppression, Tatum knows what she’s talking about and Daria Roithmayr’s Reproducing Racism blew my mind. Once I got past my initial desire to throw it across the room, that is.

My desire to throw the book (at a slim 180 pages it would have flown well) was not due to any faults on Roithmayr’s part. Quite the opposite. The book is excellent and Roithmayr’s has a very compelling premise that most of our models of racism are wrong. She claims that instead of thinking about racism as individual actions rooted in hatred and bigotry, racism operates much more like an economic monopoly  that has been able to lock in racial inequalities by coming to the market first and then operating like a cartel in favor of white people.

I wanted to throw the book across the room because Roithmayr’s is incredibly convincing. And hundreds of years of racial economic and educational collusion is a pretty depressing thought for a country that purports to run on meritocracy. It’s easy to say that “racism is a problem that wasn’t created overnight, so we won’t fix it overnight” but when presented with a series of economic, mathematical, and legal examples about why inequalities are locked-in and the country is getting more unequal, it got hard to see a path forward.

Positive feedback loops (If You’re White)
The most poignant, and unexpected, example that Roithmayr uses to illustrate this example of lock-in is Polya’s Urns. Polya’s Urn is a mathematical model that essentially works as follows: 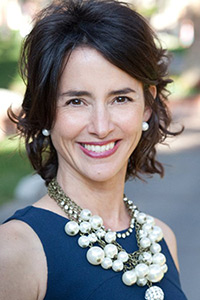 The connection here for Roithmayr is that the first few draws establish a path and then it continues to be come easier to continue down the path that’s already been established. In terms of structural inequalities, the decisions to favor white people in job markets, schooling, housing, and the law all act like draws in Polya’s Urn because they provide preference for white people (draw) and then enrich white people (adding back another ball) thus creating a feedback loop that makes it easier to keep selecting white people. Chattel slavery in the United States can be seen as two-hundred and fifty years of draws in favor of whites that establishes an environment  that is very difficult to change. (And it’s not like we added a lot of resources back to Black people in 1863 and “forty acres and a mule” is still a relevant metaphor for broken promises. But I digress…)

How does the feedback loop work? 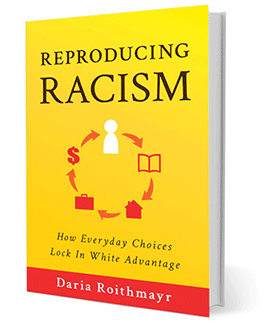 Just using the book cover (with a small adjustment in sequence)  as a diagram we can think of it this way:

This could be relatively race-neutral on the face. After all, a person of color would benefit from the same access and the same structures. Sure, theoretically I guess…

We don’t live in a theoretical space and neither does Roithmayr. She looks at policies and practices that excluded people of color from accessing schools (segregated schools), housing (redlining and restrictive covenants), jobs (union membership) and legal status (status as a human being, voting rights, ability to naturalize and establish citizenship). When these historical and structural factors lay on top of one another we get locked-in systems of inequality where if we just stop discriminating on the basis of race (to paraphrase Chief Justice Roberts) we will still maintain and exacerbate levels of racial inequality.

It’s compelling. It’s also depressing as hell for someone who works on anti-racism in schools.

If racism is so locked in, do we just give up?
I was tempted. For a second. But this is why you finish books.

I’m glad I read to the end and didn’t throw it across the room in frustration because Roithmayr’s pivot to solutions argues that once we shift our thinking about racism from individual acts based on hatred into a model where white people have acted as a racial cartel we can think differently about solutions and Roithmayr has some equally compelling avenues for solutions:

There can also be substantial interplay and overlap between these areas of influence. By hiring a critical mass of people of color in an organization, you can shift social norms in powerful ways and policies can help you do that.

I’m still digesting a lot of this, and it’s already shaping my perspective to working toward improving racial equality in schools. I’m curious to see of honing my understanding of how racism works, particularly with neutral-facing policies will make the change process more effective. For the first two-thirds of the book things felt hopeless. After reading I am more hopeful because if Roithmayr is correct in her assessment that inequalities are locked-in and getting worse, and if Martin Luther King Jr. is correct in his assessment that the moral arc of the universe bends toward justice then the arc only bends toward justice because of the people who are pushing hard to bend the arc. We need to keep applying pressure and Reproducing Racism helps me target where to apply force.